10 Unusual Ways to Release Oxytocin Into Your Life

Another hormone that the body is more than happy to release. Oxytocin. Oxytocin performs two very important functions that allow the human race to continue. But these functions have various beneficial side effects.

2)      Oxytocin is released when a woman is in labor. It helps the cervix stress so it’s in less pain. It’s released for women, that is. For men, when the female cervix starts to expand it’s the beginning of about nine years of agony.

Basically, Oxytocin is the hormone that is there at the critical moments of life creation. It’s the “life hormone”.  It also helps reduce cortisol levels (you know that feeling of relaxation you get after sex) and it reduces inflammation of the vagus nerve. (I sort of like that word: “vagus”. It’s both “vague” and “vaginal”).

So I’m not going to point to all the research. You can google it with your glasses. But basically, there’s various ways you can trick the body into releasing oxytocin. The benefits are simple: you feel better and you will live longer and you will reduce stress and be happier.

–          Give money away. Turns out that showing compassion in a visceral way like giving money is linked to higher levels of oxytocin. My guess is that giving to charity is not the way to do it. I prefer my method of being a superhero that I write about in this post:

–          Hugging someone. Touching and hugging release oxytocin with hugging more powerful than touching and hugging someone you love even better than normal hugging. So a hug is better than a handshake. But almost as good as hugging is imagining yourself being hugged or cuddled by someone you love. Huh. It’s really funny how the brain does that.

–          Using facebook. I like to browse my facebook timeline and occasionally “Like” a photograph that a random friend from 30 years ago posted. I would never in a Million years call that friend and say, “that was a real cute photo of your baby that you posted.” But liking the photo is my way of connecting with someone that I have felt close to at some point in my life, even if it was only because her locker was next to mine in junior high school. Guess what, using social media in this way turns out to release oxytocin. You know you feel good when you do it. Do it more. IN particular, facebook like all of my blog posts. [The funny thing is, someone has actually done this scientific research and demonstrated it. Not the part about liking my blog posts but about facebook in general. Although liking my blog posts will certainly release Oxytocin. You can start now if you want.]

–          Laughter. I will tell you my pre-date secret. In the brief period when I was single in between separation and re-marriage I had a technique before every date. I would watch either Michael Cera doing comedy or Louis CK doing standup. This would get me laughing, make my oxytocin hormones go on fire, and then I’d go right into the date, with all my sex hormones raging. Plus. I would be temporarily funnier, with a half-life of about two hours. I knew after four hours I would be boring again so the date would have to be over by then. I do this before talks also.

–          Take a walk. Note: I didn’t say take a run. Running is great for reducing the metabolism but so is eating better. Else, for me at least, running is really hard. I hate it. But I love to walk. Walk in the sun. The sun is a nutrient. And a half hour won’t kill you, despite what global warming people say. Walking outside, as you might guess, is statistically correlated with higher levels of oxytocin.  Well, you say, I can’t walk. I have meetings all day. If you can, try to take a walking meeting. This helps you bond more with the person you are meeting with, and you might even have an adventure along the way (guess what – scientific research shows that having an adventure with someone also releases oxytocin. I guess because then you know when you are chasing wolves with someone then you will feel safer). The last time I had a walking meeting with a friend, a guy started yelling me from a car and I challenged him (with a smile on my face) to a fight. My friend had to drag me away while the guy was parking his car and getting ready to kill me. It was fun. It was an adventure. I felt thrilled. Several months later, I had a walking meeting with that same friend just yesterday.

–          Shoot guns. Call up a friend right now. Make an appointment at a gun gallery. And shoot guns. I don’t know what to tell you. This releases oxytocin also.

–          Call someone. It’s good to talk to a friend. I don’t have a lot of friends. I have about three people on my call list. Maybe four if I stretch it. Maybe five. I don’t know. Maybe 50. I like a lot of people but I’m too shy to call them. But maybe I should. And just chat for a few minutes. Like we all used to do when we were kids. “Hey, how are you doing? What’s up?” This feels good. It’s like a vocal hug with someone we like. Vocally hug people today.

–          Being trusted. This is hard. You can’t force people to trust you. And trusting someone doesn’t release oxytocin. But being trusted does. So live your life in such a way that more and more people will trust you. Guess what: you will be viewed in a more charismatic way if people trust you than if people don’t trust you. Why not try this? How can you be more trusted. Oh my god, why so many questions today? My hands are already tired. I’m about 1497 words already.

–          Trust me when I say this: here is my Oxytocin-rich meal: eggs, mixed with bananas, with pepper. Each ingredient known to release high levels of oxytocin. So why not eat them all together: something sweet, something savory, something spicy, a fruit, some protein, its all good. Eat a big plate of that and nothing else. BAM! You are off for the day on an oxytocin spurt.

–          Deep breathing. When the vagus nerve is inflamed your breathing becomes more shallow. It’s fight or flight time! You are panicking. Your breath becomes quick. Stop it! Breathe deep. Let me tell you something: most people think “yoga” is all those exercises where people are standing upside down and doing weird things. In the Yoga Sutras, written in 300 BC, there are 195 lines divided into four chapters. In all those lines ONLY ONE LINE refers to physical exercise. It basically says, “be able sit up straight”. That’s it. That’s the only reference in the Yoga Sutras to physical exercise. Just as important is an area of yoga called pranayama which has to do with deep breathing.

Basiccally, yoga measures a lifespan in the number of breaths you take. A dog pants fast and dies young. A turtle breathes slow and lives to over 100. Pranayama is the art of breathing slower and slower And using your cavities in your bodies other than your chest cavity to hold your breath (i.e. your abdomen, for instance). You don’t have to be a pranayama expert. I don’t want to be one. But the simplest exercise is to sit there and hold your breath for 8 seconds, breath out for 8 seconds, breathe in for 8 seconds, hold, etc. Do that for ten minutes a day. They didn’t say this in 300 BC but your oxytocin comes out to play during these moments. I could put links to all the scientific research on these things. But it’s worth googling to check out if you don’t believe me. 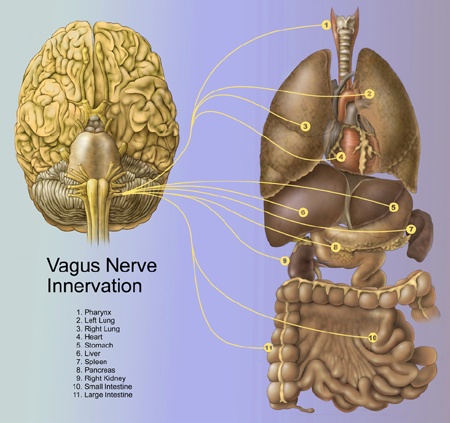 (it connects all the parts of your body to your brain. Don’t let it get inflammed or you will die).

This is all good and bad news. The good news is that there is a chemical in your brain that when released, makes you feel good for up to two weeks. And if a lot of it is released you either feel like you are having an orgasm for two weeks or, I don’t know, like your cervix is being expanded for two weeks. I have no idea on that one.

The bad news is exactly the same. A CHEMICAL will make you feel good for two weeks. In other words, our basic human bodies are no better than Pavlovian dogs – triggered to salivate when the right stimuli hits our 200,000 year old evolutionary brains. We’re no better than the dogs. No better than the jellyfish that crawled out of the bottom of the ocean and then formed tentacles, then arms, then brains.

Forget all self-help. It’s all garbage. It’s all about this one silly chemical. The news lately is all about Higgs-Boson being the “god particle”. Well, oxytocin is the “god hormone”.

That said, I’ll do all of the above. I need my body functioning. I need to get rid of mental waste and physical waste and emotional waste. Why not?

But at the end of the day it’s spiritual waste that I’m after. And how do you get that? How do you get to that peculiar desire of trying to have no desires. Because when you expect nothing, you have the immense satisfaction of getting everything you want.

How do you get there?

It’s not Oxytocin. I won’t be fooled into believing it. But if it makes me shit out my mental and emotional waste better then sign me up.  Being happy is a good start. But oxyocin is just the flower. And you can’t see the flower without the light. The goal is to be the light.

The Simple Truth About Happiness

How Does Stress Affect Physical Wellness?

Great Self Help Advice That Can Help Change Your Life!